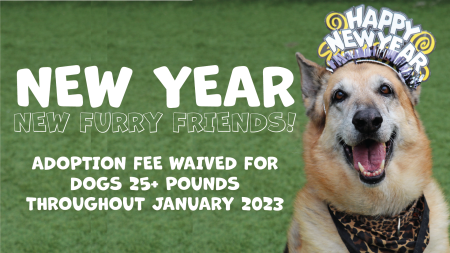 Celebrate the new year with a new furry friend by adopting from OC Animal Care! With such successful adoption rates seen during the December 2022 promotion, OC Animal Care is excited to continue waiving adoption fees to highlight and encourage adoptions of dogs 25 pounds and over throughout January 2023.

During the holiday adoption promotion in December 2022, 92 dogs that were 25 pounds and over were adopted compared to 45 dogs in the same weight range in December 2021.

As a municipal shelter, OC Animal Care’s inventory consists of mostly large breed dogs, many of which have medical or behavioral challenges. In December 2022, three special dogs found a home just in time for the holidays thanks in part to the month-long fee waive promotion.

Arriving at the shelter in April 2021, Darling was the longest-stay resident at OC Animal Care. Darling was rescued off the streets by an animal control officer after receiving a call about a dog wandering around, nervous and alone, with nothing but collar and a dangling leash. During her time at the shelter, Darling loved to play tug-of-war with her favorite toys, wear her favorite bandanas around her neck, and spend quality time with staff and volunteers. Darling began her new life with her forever family on December 22.

Lu Lu arrived at OC Animal Care in August 2021 when her owner fell on hard times and could no longer care for her. Being in a new environment, Lu Lu was extremely nervous and scared at first. After Lu Lu became more comfortable, she blossomed into a sweet girl that loved getting back scratches and belly rubs, going on walks, and cuddling on her bed. Lu Lu, and her bright eyes, stole the hearts of her new parents when meeting them on December 20.

After being surrendered to the shelter in August 2022, Bruno became one of the most popular residents at OC Animal Care. Bruno was deaf, but he was incredibly smart and playful. He knew sign language for sit and lay and was a true gentleman when meeting other dogs and people at the shelter. On December 20, Bruno was adopted into a loving family, inheriting multiple four-legged brothers and sisters.

Those adopting dogs 25 pounds and over will have their adoption fee waived, which includes microchipping, vaccinations, spaying or neutering, and an anti-parasite treatment. Waived adoption fees do not include licensing fees or puppies six months of age or younger.

The adoption promotion is available to residents of any city. With over 400 adoption visits available per week, potential adopters can schedule an adoption appointment today by calling (714) 935-6848 or drop by for a walk-in visit. Walk-ins are welcomed on a first-come, first-served basis as staffing allows. To view available animals at OC Animal Care, visit ocpetinfo.com.

Every Saturday, from 11 a.m. to 2 p.m., OC Animal Care continues to spotlight dogs who are ready to find their forever homes at Pooches on the Patio, a meet-and-greet style event, where dogs show-off their large and loveable personalities. Throughout January, Pooches on the Patio will feature dogs that are eligible for the waived adoption fee promotion.

For more information on ways the community can support the animals at the shelter, visit ocpetinfo.com/get-involved. Those interested in providing assistance to the shelter’s efforts in caring for pets in need can easily do so by viewing OC Animal Care’s Amazon Wishlist.